FOR YOU DID FORM MY INWARD PARTS; YOU DID KNIT ME TOGETHER IN MY MOTHER’S WOMB. I WILL CONFESS AND PRAISE YOU FOR YOU ARE FEARFUL AND WONDERFUL AND FOR THE AWFUL WONDER OF MY BIRTH! WONDERFUL ARE YOU WORKS, AND THAT MY INNER SELF KNOW RIGHT WELL.

MY FRAME WAS NOT HIDDEN FROM YOU WHEN I WAS BEING FORMED IN SECRET [AND] INTRICATELY AND CURIOUSLY WROUGHT [AS IF EMBROIDERED WITH VARIOUS COLORS]. IN THE DEPTHS OF THE EARTH [A REGION OF DARKNESS AND MYSTERY].
YOUR EYES SAW MY UNFORMED SUBSTANCE, AND IN YOUR BOOK ALL THE DAYS [OF MY LIFE] WERE WRITTEN BEFORE EVER THEY TOOK SHAPE, WHEN AS YET THERE WAS NONE OF THEM. HOW PRECIOUS AND WEIGHTY ALSO ARE YOUR THOUGHTS TO ME, O GOD! HOW VAST IS THE SUM OF THEM!

IF I COULD COUNT THEM, THEY WOULD BE MORE IN NUMBER THAN THE SAND. WHEN I AWOKE, [COULD I COUNT OT HTE END] I WOULD STILL BE WITH YOU. PSALM 139:13-18 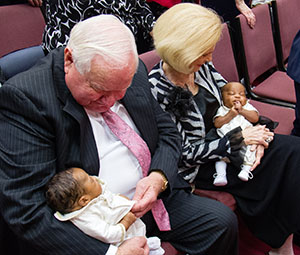 Even as [in His love] He chose us [actually picked us out for Himself as His own] in Christ before the foundation of the world, that we should be holy (consecrated and set apart for Him) and blameless in His sight, even above reproach, before Him in love. For He foreordained us (destined us, planned in love for us) to be adopted (revealed) as His own children through Jesus Christ, in accordance with the purpose of His will [because it pleased Him and was His kind intent]—
Ephesians 1:4-5

And when the time for their purification [the mother’s purification and the Baby’s dedication] came according to the Law of Moses, they brought Him up to Jerusalem to present Him to the Lord—As it is written in the Law of the Lord, Every [firstborn] male that opens the womb shall be set apart and dedicated and called holy to the Lord.
Luke 2:22-23

For this child I prayed, and the Lord has granted my petition made to Him. Therefore I have given him to the Lord; as long as he lives he is given to the Lord. And they worshiped the Lord there.
1 Samuel 1:27-28

Then little children were brought to Jesus, that He might put His hands on them and pray; but the disciples rebuked those who brought them. But He said, Leave the children alone! Allow the little ones to come to Me, and do not forbid or restrain or hinder them, for of such [as these] is the kingdom of heaven composed. And He put His hands upon them, and then went on His way.
Matthew 19:13-15

error: COPY PROHIBITED - All contents of this website are copyright protected